Radiometrics – What Are Gamma Rays and How Can They Help Me Find Resources?

Gamma Rays are a naturally occurring product of radioactive decay in the crust of the Earth.  Gamma Ray particles emanating from the surface of the Earth can be sampled and classified through spectrometric methods to reveal their individual source elements. Only three of these elements, Uranium, Potassium and Thorium, are abundant enough on Earth’s surface to be measured by airborne Gamma-Ray Spectrometers. The relative concentrations of these three elements can provide a useful tool in identifying zones of hydrocarbon seepage over oil and gas reservoirs.

Russian scientists first recognized a correlation between decreased total gamma ray counts and petroleum deposits in the 1920’s. Further exploration efforts using total gamma ray counts were utilized, but not prevalent, in the U.S. and elsewhere throughout the rest of the 20th Century. The use of total gamma ray counts without the ability to separate the relative constituent elements of Uranium, Potassium and Thorium, was often unreliable due to variations in surface geology and soil types. The advent of modern multi-channel spectrometers like the AGRS (Advanced Gamma Ray Spectrometer) system used by EDCON-PRJ has revolutionized the ability to detect and map geochemical signatures over zones of hydrocarbon seepage.

“Hydrocarbon accumulations at depth can result in measurable geochemical anomalies at the surface. Hydrocarbon microseepage is due to the vertical migration of gas above hydrocarbon deposits. Through a chemical reduction process, K and U concentrations can be reduced relative to Th. Alternatively, the signature of reduction-oxidation electrochemical cells above reduced bodies has been applied to both hydrocarbon and mineral exploration. Both types of alterations can be inferred from variations in radioelement concentrations.” International Atomic Energy Agency, “Radioelement Mapping” IAEA Nuclear Energy Series No. NF-T-1.3, 2010 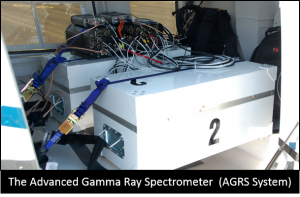 The AGRS System consists of four independently-processed detectors for a total of 16.8 liters of downward –looking NaI crystals. The 512 channel processors provide high-resolution and excellent signal to noise ratios throughout the gamma ray spectrum.  We offer airborne radiometric surveys utilizing both helicopters and fixed-wing aircraft. Airborne geophysical surveys are normally flown on a regular grid along parallel lines (“flight lines”). The flight line spacing depends on the survey application. For detailed surveys, used for geological and environmental mapping, flight lines are usually between 50 m and 400 m apart. Regional geochemical baseline surveys may be flown with a flight line spacing of 1 km or greater.

Pico Envirotec’s Advanced Geophysical Information System enables our operators to monitor individual detector performance in real time. The 512-channel resolution of the AGRS along with the use of Geosoft Praga 4 processing software allows for removal of radon effects through  214 Pb photopeaks  and eliminates the need for an upward-looking crystal.

The role of data processing is to correct the observed data for those influences that are not
related to the geology, and then reduce the airborne count rates to estimates of the ground
concentrations of the radioelements.  Because this techniques maps surface feature, it is important to have a solid understanding of surface processes (e.g. weathering) and the interaction of these processes with bedrock. Our primary processing methods include removal of radon and cosmic background, correcting for temperature and humidity, and normalizing to Thorium.  Raw data is low resolution and shows banding effects due to daily differences in temperature, humidity, radon, and soil moisture. In the figure below, we can see the removal of the environmental interference in the data. This is the first step towards obtaining a sensible and direct geological  signal of significance  independent of the instrumentation and survey parameters. Our Advanced Processing techniques include isolating the Potassium, Uranium, and Thorium (KUTh) channels from the Total Count spectrum. The result is a much higher-resolution image than the standard Total Count Map. This data is then used to generate individual Potassium, Uranium and Thorium Concentrations. 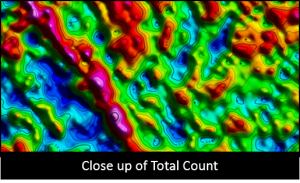 Saunders et al. (1994) studied the radiometric response over several producing and prospective fields in Australia. This work was conducted as a follow-on to earlier work in theUnited States. They found that radioelement anomalies over hydrocarbon microseepages have the following characteristics:
1. thorium remains relatively constant;
2. potassium is significantly diminished; and
3. uranium is somewhat diminished.

Their approach is to normalize the potassium and uranium to the thorium, as well as compare the relative abundances of the uranium and potassium. The primary technique is to look for low responses in the normalized potassium, supplemented by a high response in uranium relative to potassium.

The acquisition of high-resolution gamma ray spectrometer data, and careful data processing and enhancement=to discriminate alteration effects from the host lithologies, can provide a viable exploration technique. Magnetic data can provide a powerful complement to locate these subtle alteration signatures.

We typically acquire magnetic data at the same time as radiometric data and the benefit of integrating these two sets of data is shown here. Usually, when comparing Uranium to Potassium Ratio and magnetic survey data, there are subtle lineations apparent in both scenarios. These liniations reveal fault and fracture patterns in certain sedimentary strata which can be interpreted as pathways for seepage and targets for oil and production.